You might be able to tell I’m pressed for time on the food front lately. This chili is the fastest I’ve ever made. Still yummy though. 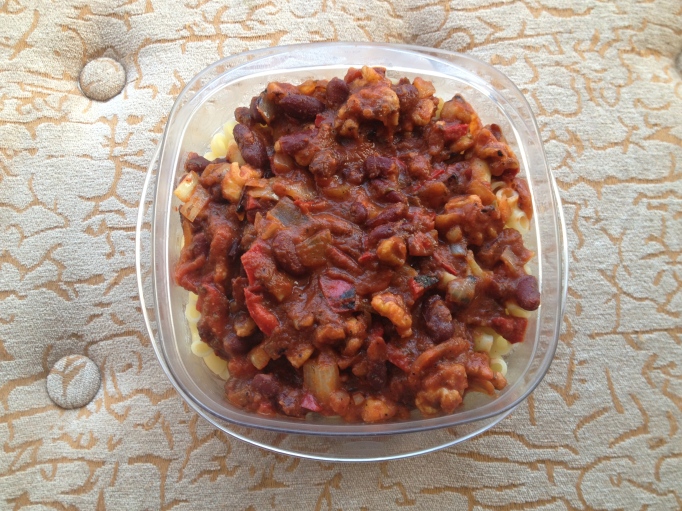 Asado is a type of sweet-sour stew from Filipino cuisine.  They must eat a lot of meat in the Philippines because it absolutely dominates in almost every Filipino cookbook I could find.  The website VeganPinoy.com has an amazing wealth of lovely vegan-adapted Pinoy recipes.  This recipe is modified from that website.

DIRECTIONS:
In a medium sized pot, cover carrots and potatoes in water.  Cover and turn heat to high until they boil.  Uncover and boil them about 10 minutes on medium high heat until they are al dente.  How fast they reach this state depends upon how small you chop them.

In a separate pan, sauté slices of sausage in oil on medium heat until brown and then flip them over and let them brown on the other side, about 5 minutes.  Add the soy sauce, lemon juice, sugar, and tomato sauce to the pan and stir until well blended.  Drain the carrots and potatoes and add them to the pan.  Toss to coat.

Prepare all ingredients and set them in bowls stove-side. Heat 1 tablespoon oil in a large pan or wok until smoking. Fry vegan chorizo first, stirring it quickly. Add cabbage next and toss around for 30 seconds. Add rice, tomato, and green onions, stir until everything is incorporated.

Turn off heat. Make a well in the center of the stir fry. Pour soy sauce, ketchup, and vegan Worchestershire into this well and then stir them through. Add salt to taste.

Mix oil with garlic and divide and spread the mixture on 2 slices of bread. Broil the bread for 2 minutes at 400 degrees or until bread begins to brown. Take the bread out of the oven and top them with tomato, nutritional yeast, salt, and pepper. Broil 2 more minutes.

Soak 1 cup refrigerated tteok, either the flat or cylindrical ones, in water for 2 hours or overnight. Alternately, boil them in 2 cups of water for 30 seconds. Sauté onion and garlic in oil for 2 minutes in a small pan on medium heat. Roughly chop tomatoes and put them in the blender. Add the onion/garlic mixture, gochujang, almond milk, and salt.

Blend until smoothly pureed, about 2 minutes.

Heat the soup on the stovetop or microwave and stir in tteok before serving.

Combine all ingredients except macaroni in a crockpot. Cook on low for 8 hours or on high for 4 hours. Add macaroni during last 20 minutes of cooking, simply dump it in and turn crockpot to “High” setting.

4 cups cooked millet or rice, to serve on the side

Chop cauliflower roughly. In a large pot, immerse cauliflower in water and bring to a boil. Once it boils, turn heat to medium high and simmer 10 minutes or until cauliflower is fork-tender but still has some of its firmness. Drain the cauliflower and set it aside.

Fry the carrot and onion in the bottom of a second large stock pot on medium high heat until it is translucent, about 3 minutes. Make a well in the center of the onion-carrot mixture. Add 1 tablespoon of peanut butter to the onions and stir until it melts. Add all spices: cumin, nutmeg, thyme, paprika, and cayenne pepper or hot sauce, stir briefly, about 30 seconds. Add cauliflower, red bell pepper, garlic, and chopped tomatoes. Cook for 3 – 5 more minutes until tomatoes release their juice and are heated through. Serve alongside cooked millet or rice and garnish with chopped peanuts.

Puree tomatoes in a food processor or blender until liquified. Alternately, mix 3 cups tomato sauce with 1 cup vegetable broth and set aside.

In a large soup pot, fry onion in oil on medium-high heat until onion is translucent, about 5 minutes. Add garlic, cumin, and thyme, stir, and cook for 1 minute. Add tomatoes/tomato sauce & veg broth, beans, and corn. Stir until heated through, about 5 minutes. Salt to taste.

In a small bowl, mix chopped onion, vegan mayonnaise, and nutritional yeast, and salt until it makes a paste. Spread the paste on the pita bread thinly covering one side. Place the pita bread mayo side up on an ovenproof pan. Top with sliced tomato, arugula, and pine nuts.

I like to pre-roast eggplant because if you just fry raw eggplant, eggplant absorbs oil like there’s no tomorrow.  If I pre-roast it, I feel I have much more control over how much oil is in my final dish so I don’t end up with a gross oily pool.  As much as I like Indian restaurant cuisine, it usually has way too much oil for me, case in point the last time I ordered Indian cuisine.  I don’t like super-oily food because not only is it fattening, it upsets my stomach.

Poke holes in eggplant with a fork.  Roast whole eggplant on a cookie sheet in the oven at 400 degrees for one hour.  You can roast it for less time if you like a firmer eggplant.  Once the eggplant is out of the oven and cool, peel the skin off, chop it, and set it aside.

In the meantime, fry onion in oil on medium heat, add all spices.  Add tomato chunks, stir, and allow to cook while the eggplant roasts.  Once tomatoes are bright red and juicy (about 10 minutes) add the garlic.  Allow it to cook about 5 minutes.

Chop the peeled, roasted eggplant and mix thoroughly, serve with bread (I like toasted pita bread) or rice.

Stuff of the Kim

Tweets of the Kim